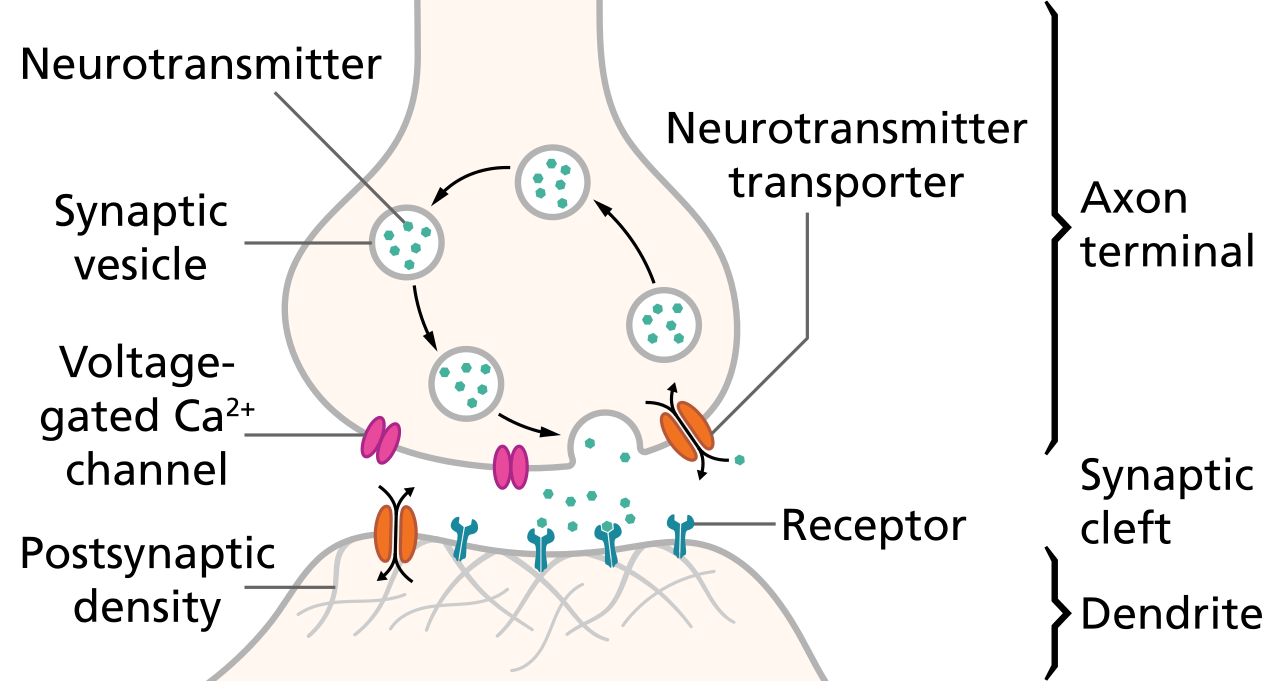 Lisa V tries to keep it simple and explains the deal with alpha-synuclein. Originally published online a couple of years ago when a-SYN was still new to the PD community, this article has been updated in the light of more recent research. All evidence from then and now points to this sticky substance being the cause of Parkinson’s.

Let’s gets a couple of abbreviations and definitions out of the way first:
a-SYN is Alpha-Synucein.
PD is Parkinson’s (if you couldn’t work that one out, you’re really in trouble).
Aggregates are basically debris or detritus; organic matter produced by the decomposition of organisms.
Alpha-Synuclein is a sticky protein found throughout the body, but the motherlode is in the brain.

Ideally, the a-SYN protein appears to function in the loading o

f vesicles; small spherical bits of membrane that carry neurotransmitter molecules to the pre-synaptic end of a neuron. This, in turn, bumps into the business end of another neuron, allowing for the neurotransmitters in the vesicles to be released into the synapse.

The top is the presynaptic neuron; the bottom, postsynaptic. They are both separate neurons in this relay event, passing the baton. In Parkinson’s and otherspecific neurodegenerative diseases, it’s been found that a-SYN proteins are ‘misfolding’, creating clumps or aggregates. Like almost all proteins, after a-SYN is synthesised by the cellular machinery (i.e. ribosomes – they build long chains of amino acids, one at a time – exhausting!), it is supposed to fold in a certain way; the entire function of a-SYN is dependent on proper folding. If the folding goes wrong; the protein fails to function. The fall-out of this wayward behaviour is aggregation – crap everywhere that ‘gums up’ the works.

That’s the simple version… without reference to other players like Tau and A-Beta proteins, or DNA strands, mitochondria, enzymes, or the many genes already identified as biomarkers for the disease. Not wishing to overwhelm you, dear reader, this will have to do in order to discuss the major issue, which is: What to do about these errant proteins?

Just to make this all the more complicated, these deviant, delinquent aggregates are not the only bits of junk that scupper any healthy a-SYN from assisting with neurotransmitter release from neurons. There’s the possibility of too much a-SYN being produced as well, and that an excess of a-SYN would lead to toxicity. Either way, its accumulation is a big problem in 90 to 95 per cent of Parkinson’s patients. The other 5 per cent are those that have the direct-inherited disease (genetically passed down from parent to child) and for them, a-SYN is not considered a big player.

I should mention this toxicity is specific to neurons that release the neurotransmitter dopamine. Apparently, the aggregation may even be protective in other types of neurons. My understanding is that, on a cellular and molecular level, waste product is normal and dealt with in an orderly fashion. Not so with these insufferable misbehaving a-SYN, simply because there’s too much junk. And another thing we have to throw into the mix – oxygenation.

Say hello to ‘free-radicals’, which is what the dopamine neuron-specific toxicity appears to involve:  the formation of reactive oxygen, which can evolve during the breakdown of excess dopamine that builds up when it cannot be released from the neuron. At a cellular level, it’s poison – it’s caustic and can cause the iron in our cells to basically go rusty and WD-40 can’t touch it!

A similarly unexpected finding; one that’s got everybody hot and bothered, generating a great deal of interest, is that misfolded a-SYN are also found in our gut and olfactory system (that’s ‘nose’ to you and me), which means they travel and propagate, infecting good a-SYN with their abhorrent behaviour. To demonstrate the significance of that, Patrik Brundin, MD, in 1988 received his PhD on intracerebral transplantation in PD. By 1992, he was part of a team that started neural transplants in PD patients. That worked well… for a time. But, and here’s the important bit, in 2008, they found Lewy bodies (these misfolded a-synuclein clusters) in the significantly younger (chronologically) grafts. Well, that opened up a whole new can o’ worms. Could it be that this was Prion disease – a neurodegenerative disorders causing inflammation and infection? Or maybe sub-structural faulty amino-acids could be a factor in a-SYN clumping? The body naturally deals with waste products – even on a cellular level, but these aggregates are simply too numerous.

More importantly, it meant that, at some point during their travels, they were passing on a mutation to their buddies… and that in turn suggested that at some stage in this process, they were also vulnerable. It was then a completely reasonable idea to think that bacteria might be involved here. What kills bacteria? Antibodies, for one.

That has led to some remarkable potential offerings in the Pharmaceutical field like NeuroPhage Technologies’ drug candidate NPT001 (bacteriophage M13), currently in the process of being filed with the FDA. The first human trials were expected in 2016. But, it required administration to the brain directly, crossing the blood-brain barrier (BBB) which is very tricky as most antibodies are too large to get in.

Another offering is ICBI Technologies, and their SMART molecule (Specific Molecular Architecture for Recognition and Therapy), which has proven demonstration of BBB uptake in mice. Parkinson’s Resource Organization has been working closely with this Pharma since 2012. They keep us posted by way of ‘The Road to the Cure’.

Pharmaceutical companies such as Neuropore Therapies is teaming up with Belgian drugmaker UCB. QR Pharma, Inc. has something in the pipeline too.

I always seem to be picking on MJFF but it’s only because they’re the most visible. All the above have, at some stage or another, had significant grants from peeps like the MJFox Foundation. I shoved poor MJ’s mug on three of my posts. Why? Because I wanted all the Orgs to work together under the umbrella of, say the World Parkinson’s Coalition. Interestingly, it was Jo Rosen, Founder and President of Parkinson’s Resource Organization, CA who schooled me on why all the PD groups, Associations, Foundations and Institutes do NOT work well together… has a lot to do with agendas. Bleedin’ politicking!!

But Jo Rosen – one feisty and savvy warrior – told me “If ICBI had $5m today, it could be at human clinical trials in 18 to 24 months… I’ve already spent 3.5 years on this, Lisa.  Imagine had people opened their minds and their pocket books 3.5 years ago, we would have been where we are still looking to be…’’ Now, $5million is a drop in the ocean in the scheme of things; chump-change for some.

Since the first publication of this post, I’ve been watching this pesky protein avidly… In an article published end of August 2015 – not long after this, this much talked-about errant misfolding protein Alpha-Synuclein was back in the news. This time with a twist! Researchers from the World Journal of Gastroerology have found that a-SYN in the gut are also misfolding in Parkinson’s; either as a result of mimicry or possibly other pathogens like virus.

To explain why this is important, we need a few acronyms… The enteric nervous system (ENS) is a subdivision of the autonomic nervous system (ANS) that directly controls the gastrointestinal system. The central nervous system (CNS) is the complex of nerve tissues that controls the activities of the body. In vertebrates it comprises the brain and spinal cord.
All these systems need to interact effectively for maximum functionality. This article demonstrates good news for PwP. It shows a healthy gut makes for a happy body and leads us that bit closer to understanding, thus controlling wanton proteins.

Then, January 5th of 2016, DZNE – German Center for Neurodegenerative Diseases explore the question of a-SYN as a Prion (infectious and transmittable). While this is not considered to be the case, it was the way these proteins travelled that raised alarm.

January 26th of this year saw a-SYN laid bare. In a milestone  achievement and for the first time ever, Alpha-Synuclein had been actually seen inside a healthy cell. To date, only the wayward behavior; the aggregated amyloid fragments of this protein have ever been identified and only because they clump in Neurodegenerative disease.  Scientists have been baffled that they could never actually catch Alpha-Synuclein in its normal, healthy state. How could it hide so well?

It turns out to be in its composition. Even though it is widely known to have a very real and concrete structure, in its isolated, purified state, it actually has no structure whatsoever. Hiding in plain sight, it was only found through extreme perseverance and innovative imagery via nuclear magnetic resonance spectroscopy (NMR) and electron paramagnetic resonance spectroscopy (EPR).

This groundbreaking discovery is vital as this alpha-synuclein protein is thought to be the cause of Parkinson’s. With the ability now to visualize them in their normal state, researchers have finally found ways of examining them in action within healthy cells. Plans now look to damaging the protein in ways similar to Parkinson’s then introducing them into increasingly ‘aged’ cells to mimic degeneration.

Most recently, Chemists from University of Illinois at Urbana-Champaign  have found that alpha-synuclein forms long fibrils; clogging up the works, so to speak. .

Interestingly, a PhD from Philly once told me back in 2002 that she thought long chains of trans-fatty acids were gumming up connectivity in PD between the neurons and neurotransmitters… she reckoned that this is what caused PD.

Curious, no? (Cue X-Files music because ‘the truth is out there…’ Ed.)

There are lots of ways to keep in touch and of getting involved...

We have a range of T-shirts soon to be available in all sizes for men and women. Here's a sneak preview.

Keep Up To Date

There's lots of ways to keep in touch...